ADMIT it. Like me, you’re prejudiced. In my case I call it ‘detestophobia’ – a visceral loathing of those who hate others, simply based on their creed, colour or religion.

So what’s yours? People of Afro origin, wily Oriental gentlemen – from whom we supposedly derived the odious acronym WOG – or that enduring favourite, the Jews?

All discrimination is irrational, but some hatreds are beyond absurd, like a woman I once met with a prejudice against redheads, since she believed it a trademark of Celtic ancestry and she loathed the Irish.

At the Simon Wiesenthal Centre’s Museum of Tolerance, in Los Angeles, it’s assumed everyone harbours bigotry by degrees; it’s just a matter of pricking consciences to out it.

After a brief welcome – and before inviting visitors to enter through one of two doors – the guide says, ‘Search your hearts and honestly pick whichever best identifies you.’

Above one door is a sign marked: ‘Prejudiced’; above the other is one beckoning the ‘Unprejudiced’.

After an uneasy pause for reflection, visitors unanimously elect the door marked ‘Prejudiced’. It’s as well they do, because the portal marked ‘Unprejudiced’ is locked.

Named in honour of the legendary Nazi hunter, the centre’s mission is to generate change through education by not only confronting the scourge of anti-Semitism – the world’s oldest hatred – but all forms of prejudice, while promoting human rights and dignity for all. 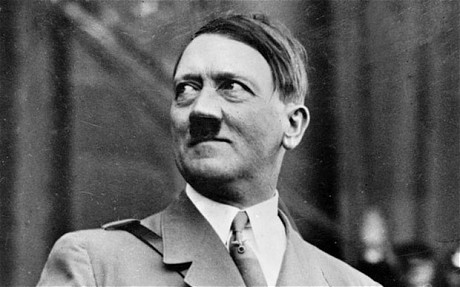 VISION OF EVIL: ‘If Jews didn’t exist, we’d have to invent them’, said Hitler

It’s a noble, praiseworthy aim. But 70 years after the liberation of Auschwitz, the death camp where millions of Jews perished – alongside homosexuals, opponents of the Nazis, the mentally and physically disabled, and others branded as subhuman ‘untermenschen’ – the Wiesenthal Centre’s challenge for mankind to confront horrors its racism unleashed is being ignored, forgotten or defied.

The exhortation ‘Never again’ is being replaced by ‘Whenever again’, nowhere more so than in Europe, cradle of the Enlightenment yet crucible of persecution and intolerance.

And, once again, Jews are at the forefront of loathing, almost to the extent that anti-Semitism is trendy, whether it emanates from the malevolent Left or the putrid far-Right.

For two millennia Jews bobbed like corks on the tide of societies wherever they chanced to settle, their existence an ongoing litmus test of how civilised a civilisation purported to be.

Few, if any, European nations can take historical pride in how they treated their Jewish citizens, irrespective of the huge contributions Jews made to all aspects of the fabric of their societies – from culture, commerce and science to political philosophy, philanthropy and inter-faith cohesion.

Yet, they have never ceased to be less than handy scapegoats to divert the masses attention away from the real causes of their misery – greedy, ruthless, oppressive overlords.

As Hitler noted, ‘If the Jews didn’t exist, we’d have to invent them.’

Inexplicably, in defiance of the lessons of history, anti-Semitism never entirely disappears, but morphs into contemporary formats.

Today the existence of Israel is a neat overlay on the vile, old tapestry of Jew hatred, since it can be sanitised as ‘anti-Zionism’ and the Jewish people’s ancient right to a state can be twisted into a vindictive denial that an historical wrong should be righted.

This is a particular hobbyhorse of the Left, who, rather than praise the only flourishing democracy in the cauldron of Middle East hate, revile it for having the temerity to succeed.

Instead, squaring this circle of lunacy, holier-than-thou, pseudo-liberals regard as a cause célèbre murderous terrorists, who slaughter political opponents, persecute Christians, execute homosexuals and denigrate women in the name of a 7th Century credo.

Such hypocrisy was repellently evident in BBC reporter Tim Willcox’s interview with the daughter of Holocaust survivors during the memorial march in Paris two weeks ago, commemorating the victims of the Charlie Hebdo massacre and the slaying by an Islamo-fanatic of four Jews in a kosher supermarket.

Standing with her Muslim friend, the woman reflected on how afraid French Jews felt, noting, ‘The situation is going back to the days of the 1930s in Europe.’

Willcox replied crassly, ‘Many critics of Israel’s policy would suggest that the Palestinians suffer hugely at Jewish hands as well.’ 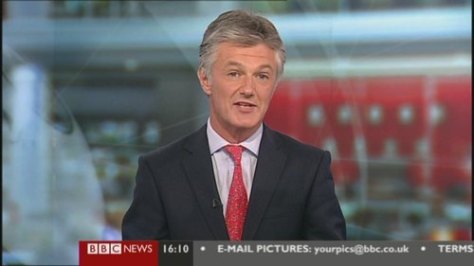 WILLCOX COCKS UP: The BBC’s Tim Willcox incensed viewers over his crass comments to a Jewish woman during the Charlie Hebdo commemorations

Conflating the Israel-Arab conflict with the murders of French Jews in France was just the sort of inane slur that features all too often in radical Left media, of which BBC News is a leading light.

And, after a wave of condemnation, Willcox’s lame, Tweeted apology – ‘Really sorry for any offence caused by a poorly phrased question…it was entirely unintentional’ – cut little ice with incensed viewers, since he is no stranger to similar controversy.

Many well remember, last November, a BBC News 24 debate when political guru Jo Phillips suggested to him that UK Labour leader, Ed Miliband, was losing the support of that well-worn racist canard, the so-called ‘Jewish lobby’.

Far from condemning her inflammatory remark, Willcox added tinder to the flames, saying, ‘And a lot of these prominent Jewish faces will be very much against the mansion tax (one of Labour’s promises if it wins the May 7 UK General Election).’

If similar sentiments had been aired against Muslims, I’d imagine Willcox would probably be job-seeking.

At best, though, the hideous events of Paris awakened a consciousness that Jews are still a barometer of how civilised is an entity that professes itself a civilisation.

Manuel Valls, the Prime Minister of France – which has a long and dishonourable record for its treatment of Jews – insisted the country needs to protect its 500,000-strong Jewish community, ‘lest France itself be destroyed.’

But, with synagogues, Jewish schools and institutions now guarded 24/7 by the military, it is a damning indictment of a nation whose motto is ‘Liberty, equality and fraternity.’ Small wonder Jews are leaving France in droves. 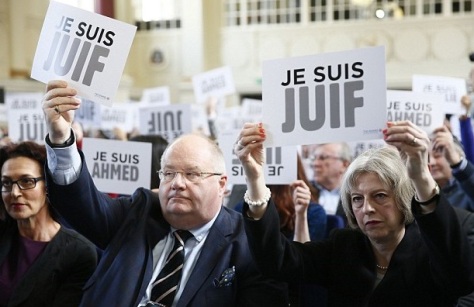 ANTI ANTI-SEMITISM: Theresa May, the UK interior minister, joins the outrage against the rise of Jew hatred across Europe

Uber-liberal Sweden – where Jews fear displaying any outward sign of their faith, like a skullcap or Star of David – is little better, as are other European nations with open-door immigration policies.

In Britain, anti-Semitic attacks trebled in 2014, prompting Interior Minister, Theresa May to lament, ‘I never thought I would see the day when members of the Jewish community would say they were fearful of remaining here.’

But, arguably the most telling comment came from Frans Timmermans, vice president of the European Commission, who recalled that mistreatment of Jews had always been a harbinger of ‘trouble ahead for European societies.’